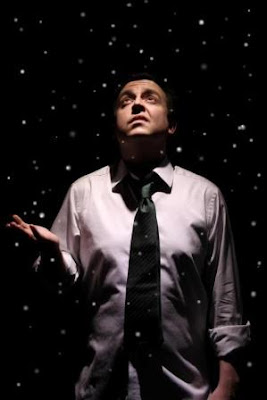 
Christmas with a difference has landed at the Sherman: amongst the brightly coloured lights and floating snowflakes, stands one man: devoid of renditions of ‘He’s behind you’, emotions run high and hangover’s hit hard when reality rears its head and the spirit of Christmas is floundering. Matthew Bulgo’s debut play Last Christmas explores the idea of finally growing up and realising happiness isn’t just about escaping the past, but embracing the future. Tom faces the ghosts of the Christmas past to head into his future.

There is a unique take on a seemingly clichéd topic in Last Christmas: Tom escapes the backwards, boring Swansea life for the lights and highs of London as a film maker, but after a while the drudgery of paying the bills and an ordinary office job seeps back in. The character’s and the detail of Swansea are vivid: Lanky, Spanner and Bins are that much more alive than the likes of London character’s ‘Suz’ and the Intern. If ‘ambition is critical’ enough for people to leave, Last Christmas highlights the fact that they end up leaving something behind: true friendship and family – what did Tom’s dad really think at the end? Was he proud? It is Tom’s journey home where he comes to realise, through a haze of alcohol that he need not have worried: he has after all begun to become his father.

A one man show is difficult to pull off but the combination of talent brought about by Dirty Protest’s collaboration with Clwyd Theatre Cymru creates an intimate piece full of emotion and passion. Siôn Pritchard’s skillful acting and comic timing is fantastic: he portrays this ordinary man in such a way that everyone can empathise with on different levels and his portrayal of those in his story is pitched perfectly, each personification adding to the depth of the story. Matthew Bulgo’s use of language and imagery is superb: he has brought a character - who could easily have slipped into a one dimensional life - into a multi-dimensional, full colour existence. Filled with stomach creasing rants that flow with ease into dark, grief filled moments that brings tears to the eyes. Kate Wasserberg has used her skill to mould these two talented elements of actor and writer into a seamless and striking piece of theatre.

Last Christmas was a captivating hour of theatre and joy to watch, filled with the mixed blessings that Christmas brings for so many and the joy for others.
Posted by RBW at 04:46