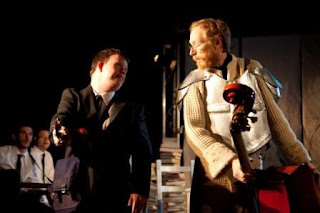 The Adventures of Sancho Panza is a modern twist on the Don Quixote classic, drawing the real and fictional worlds together and the Don is no longer centre stage. With an unusual opening scene, Sancho Panza and his mother are attending the funeral of their father and husband, it is after when Sancho cannot get his mother to read with him and he reads alone, that his imagination takes over, bringing the Don himself to life and launches Sancho into his adventure.

It is an adventure full of glorious battles that simultaneously get more creative and ludicrous as the journey goes on, from fighting a lion to a singing competition with another knight. The comic element to the show is a huge factor and the audience are often in stitches: Gareth Clarke’s comic timing as Sancho is impressive, appearing almost instinctive, the same with Andrew Tadd – whose cheeky aside’s to the audience are perfect.

The set is striking yet simple – all in white it is transformed from kitchen to castle, waterfall and country road with ease and some ingenious use of props: the Don’s horse is actually a double base and Sancho’s donkey a Violin. Roles of paper have versatile uses, from Knightly capes to waterfall’s and caves. The cast climb all over the furniture, turning a table into a horse drawn carriage.

Involving the audience in a rendition of Robbie Williams’ Angels was a stroke of genius:  I had to concentrate very hard to join in, as I fought not to break out into a fit of laughter. 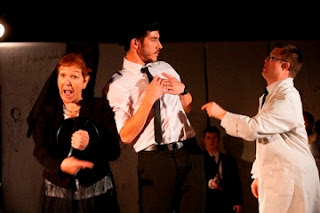 My only note would be that the piece felt like it faltered slightly: the pace started to wind down about two thirds through, rather than continue at a pace, almost if an interval might be needed somewhere. As it moves past this it does regain its momentum as Sancho is granted is own island to govern and the comedy continues.

The musical talent of the cast is brilliant: Maxwell James is handy with his guitar throughout. His rendition of the opening “There’s a million other places I’d rather be than here…There’s a million other people in the world I would rather be” is heartrending as we watch the funeral procession unfold. He plays challenging Knight in the Don’s (Gareth Wyn Griffiths) sing off. Wyn Griffiths is brilliant as the chivalrous, kind but occasionally daft Don.

Closing back in on reality, Sancho’s mother finds him reading out in the cold, his imagination having run its course and together they are able to work through their grief and Sancho’s questions of ‘Why?

A masterful, heart-warming and touching piece it is well worth seeing.

The Adventures of Sancho Panza is on tour again in 2013.

Info: www.hijinx.org.uk/ Hijinx as a theatre company are dedicated to creating accessible theatre for all the family and to the inclusion of actors with special needs.
Posted by RBW at 15:03