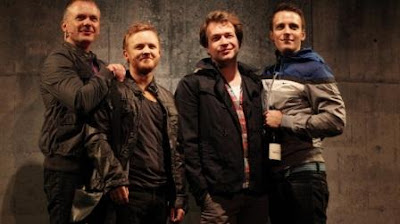 On a night when communities come together in brilliant catharsis – Wales has lost the rugby - four friends are living their own moments of catharsis as they move through their own night of fighting, reminiscing and revelations.

Llwyth takes its inspiration from the Gododdin – a tale of warriors and men from several tribes bound together as a community by loyalty for their King and their country against a common enemy. Over a year they trained during the day and feasted and drank at night before marching on their foe and wiping out seven times their number. Weaving the lyrical, poetic language of this sixth century poem into the play, writer Dafydd James handing Aneurin (Simon Watts) beautifully crafted monologues that he performs with conviction and perfectly pitched acting.

This play isn’t just about being gay or about gay life in Cardiff, it digs deeper into a world of universal insecurities, friendships that last - no matter what and that sense of belonging many of us earn for. Rhys (Paul Morgans) is turning 30 and faced with boyfriend Gareth (Michael Humphreys) supposed inconsistencies and throughout the night they fight out their differences. Gavin (Joshua Price) is that innocent teenager starting out in life, a mix of naivety and that rush to experience life. Dada (Danny Grehan) is the aging ‘queen’, father and storyteller of the group, having already lived and experienced life. Aneurin is a struggling writer, lost amongst his ideas and fighting against his past – unable to face up to his emotions and the recent death of his mother.

Humour has a huge presence in the dialogue, breaking up the tension at the most perfect moments. The Eisteddfod gets a lambasting and faces of the media get their mention as comparators to the character’s themselves and as part of their life stories.

Written predominantly in Welsh there are splashes of English and Wenglish: a vision of truth of today’s culture in Wales and even though it is English that is predominantly heard every day it adds another element to the play. As much now as in the sixth century this is a land of languages and cultures, of tribes that exist separately yet come together for a common cause.  There are surtitles available in English, but with the superb acting and physicality of the cast, the harmonic choral singing of the choir and soundtrack and the skilful use of the stage and props through Director Arwel Gruffydd Llwyth captivates the audience enough to forget about the surtitles.

A distinctly Welsh play, Llwyth is not necessarily owned by Wales, it will travel and it has proved that – receiving rave reviews at Edinburgh’s Fringe and through its invitation to the Asian Arts Festival in Taipei.

A play to make you laugh, cry and what to join in dancing, Llwyth is a genius piece of writing: tender, heart-rending, laugh out loud funny and exciting. I promise you will find it hard to fault it and will absolutely love it.

Llwyth is at Sherman Cymru for its last set of performances 12-14 September before it heads to the festival in Taipei.
Info: http://www.shermancymru.co.uk/