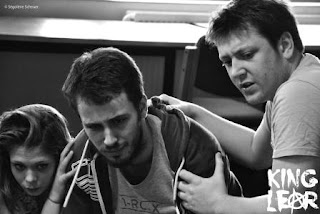 The Monkey House, Edinburgh
(originally for Buzz Mag)
The Edinburgh Fringe is a pivotal point in the theatrical calendar and Cardiff University’s very own Act One drama society are heading up there to perform, taking performances ofWuthering Heights, The Institute andKing Lear. Nearing the end of their intensive rehearsals I caught up with Piers Horner, Co-director of King Lear.
This King Lear has a substantially cut script – to fit into their 1 hour 15 minute and to make it more absorbing and engaging to a modern audience: Piers admitted it had been a challenge to retain a concise script, make a production that is far more accessible and to hold people’s attention, but also keep the essence of the play and not detract from it.

A post-apocalyptic interpretation, its intensified violence is blended with the text's raw power and the original Shakespearean language. Piers explained the idea of a crumbling society, where Lear himself is a crumbling figurehead – losing power to his two callous daughters whilst the third daughter is banished and powerless to help. Gloucester, part of the only remaining sub-plot, is corrupted by his illegitimate son Edmund, forcing his elder son to flee.

To Piers heading up to the Edinburgh fringe is incredible and hugely exciting, particularly as they only ever envisaged it as a main Cardiff Act One production and to be there on showcase with great companies in an event where anything can happen is incredible. Performing in The Monkey House they have a prime afternoon spot away from the larger evening performances.

For those lucky enough to be heading up to Edinburgh in August @LearFringe2012 is their Twitter tag.
Tickets: £7.50. Info: www.edinburghfestivals.co.uk
Posted by RBW at 14:30